Our Pets In Crisis program provides safe accommodation, food and vet care to pets whose families have escaped domestic and family violence, but who cannot take them to a shelter/refuge and have no family/friends who can care for their pet while they find safe, alternative accommodation.

Beanie and Frankie’s* Mum Iris* was delighted to have her two furry babies back in her care after she left hospital. Iris unfortunately found herself admitted into hospital after her ex-partner had physically assaulted her so badly that she was knocked unconscious. Her neighbours had heard Iris arguing with a male and the dogs barking excessively, so they had called the Police, which is when she was found and taken to hospital by an ambulance. Iris expressed her gratitude to the foster carers who looked after Beanie and Frankie for many reasons. One reason in particular was that their foster carers had given them regular professional pet grooming hair cuts. Iris said that when she lived with her ex-partner she was not able to access any of their finances, even though she had a full time job. (This is called Financial Abuse). Her abuser didn’t allow her to spend money on Beanie and Frankie, other than food so professional pet grooming would have been out of the question. When Beanie and Frankie were first admitted into the Pets In Crisis program they received all the vaccinations and medications required to safeguard them from potentially serious and sometimes fatal diseases. They were desexed and they were microchipped.

Millie needed the Pets In Crisis Program foster care accommodation for 2 months. When she first arrived she also needed veterinary attention in the form of her C5 (Kennel Cough) injection, her heart worm injection, as well as flea and tick medication. She was then placed in a foster care home with another dog, of similar size and age to her.  Millie’s reunion with her family was an emotional one. It represented a new beginning and a new life with her family that would be free from violence. Millie’s Mum told the Pets in Crisis Program volunteers that “she didn’t know if she could leave the violent situation she used to be in because she was scared about what would happen to her precious girl Millie.” She went on to add that she is so grateful for this program. 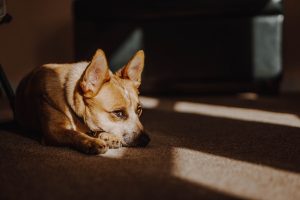 Roxanna* is a little Maltese cross weighing only 4kg. Roxanna and her mum had been living with domestic and family violence. Roxanna’s Mum made the courageous decision to leave her abusive partner and needed somewhere safe for Roxanne to go while she fled to safety herself. She called the DVConnect Womensline and Roxanna was admitted into the Pets In Crisis Program. After a tearful goodbye with her Mum, Roxanna headed to the RSPCA Wacol Animal Hospital where she was given a clean bill of health. That night would have been a very scary one for little Roxanna but the vet staff kept a close eye on her and tried to alleviate her nervousness.

The next day Roxanna was the perfect patient as she had her desex surgery. Over the next two days, little Roxanna waited for her behavioral assessment. But she was very anxious and refused to eat. The stress of the shelter environment was just too much for her. That’s when we needed a staff member to step up and agree to take her home straight away. No more time in the kennels for this sweet girl. This is how Roxanna ended up being placed with a loving foster carer named Anna*.  Anna said “When I first brought her inside my house, she wasn’t very confident. She was a little unsure of the resident cats and Chihuahua. She had to be hand-fed roast chicken to get her to eat. But she took an instant shine to my partner. Stuck to her like glue! Over the passing weeks, we saw a great transformation in Roxanna. She was outgoing and playful. She even tried to entice my very sedate Chihuahua into games. She was cheeky and funny. And she was eating like a horse! I think she settled into my place really well. Roxanna’s mum ended up needing another 28 days of emergency boarding. But I didn’t mind.  I loved caring for this little madam. When it was time to bring her back to the RSPCA Queensland so that her mum could collect her, there were definitely a lot of mixed feelings. When I saw the reunion between Roxanna and her mum, I knew that this was working out exactly as it should. Roxanna’s mum was so happy and so grateful to us for caring for her girl. She grabbed my hand and kept saying “thank you, thank you so much”. Roxanna was ecstatic to see her mum again, her little body squirmed in excitement and her tail wagged uncontrollably. It truly made this whole process worthwhile.”

Sharon* and her children were subjected to domestic violence and abuse. Sharon reached out to DVConnect and expressed she wanted assistance to leave a violent household. Sharon and her children were assisted into safe house accommodation. Naturally Sharon was anxious about leaving Missy, the family dog, with RSPCA Queensland, and was concerned about how Missy would cope with the change in environment. RSPCA Queensland reassured Sharon that Missy would be well cared for through a kind and professional service, and they would be reunited in 28 days. Missy was taken into RSPCA Queensland care and supported by animal attendants and vet clinics to have a physical exam, vaccinations and to be de-wormed. Missy was de-sexed and cleared to proceed to the behavioural assessment stage. In the behavioural assessment stage she was cleared for safety handling, separation anxiety and given the tick that meant she was suitable for foster. While assessment took place, Missy was given twice daily walks and cuddles to ensure she received regular exercise and human connection. Missy was placed with foster carers John and Jenny. John and Jenny were aware she was a Pets In Crisis dog and she had been exposed to a violent environment. Missy’s foster carers were patient as she settled into a routine of regular walks. John and Jenny regularly provided updates to Sharon about how Missy was settling confidently into her new routine. Missy’s stay with John and Jenny was extended by 28 days because of Sharon’s need for more time. Missy was in foster care for 2 months and the family reunion with Missy, Sharon and Sharon’s children was emotional because it represented a new beginning as a family. Sharon was grateful and said to John and Jenny, ‘Thank you so much for looking after my girl. I don’t know what I would have done without this program’.

Chen* contacted the Womensline seeking information about what services DVConnect provides and how DVConnect might assist someone in her situation. Chen had been in a relationship with an abusive partner for 7 years and she had previously been in contact with the Womensline for counselling, support and information. On this most recent occasion, Chen contacted Womensline seeking immediate assistance to get to safety. When identifying potential difficulties and needs in sourcing safe accommodation, Chen stated that she had a 4 year old staffy cross dog named Marble*, that she could not leave at home. In fact, part of the abuse that Chen’s partner had inflicted on her included tormenting Marble. Chen revealed that the idea of leaving Marble behind had been a huge barrier in her previously accessing DVConnect services beyond counselling and support, and Chen’s partner had directly threatened to harm or kill Marble if Chen ever left the relationship. The Womensline Counsellor that Chen spoke with discussed the Pets in Crisis program that DVConnect has available for women and their pets who have experienced domestic or family violence. Although initially reluctant to part from Marble for any extended period of time, Chen self-identified that whilst safety was a priority, assistance through the Pets in Crisis program was the best thing for herself and Marble, and knowing that DVConnect is partnered with reputable organisations through this program including the RSPCA Queensland, Chen decided to enter Marble into the program. On the same day that Chen contacted the Womensline, she had an appointment at a nearby RSPCA that participates in the Pets in Crisis program. Chen signed all documents that ensured Marble would be safe in foster care over a period of a month and then Chen was assisted to emergency motel accommodation and also refuge.